Knowledge and experience in service of  a new vision of musical transmission.

A Visual Music Show employs musical and visual means in order to instruct, amuse, inspire and stimulate creativity in students of all ages … and renew the public of tomorrow !

VisualMusicShow, like  Piccolo Opera, may be included in the pedagogical offerings that accompany an engagement of Paul Hess as conductor of your opera, ballet production or concert.

What Paul Hess does…

The show is simultaneously: a lesson, a creative event, a spontaneous demonstration of visual and musical artistic unity.

Paul Hess personifies this artistic unity and it’s realisation, representing an accessible example of creativity throughout the pedagogical journey. 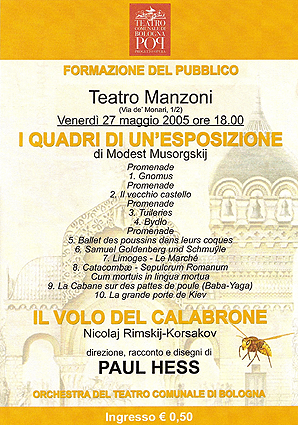 Since 2003, Paul Hess was invited to conduct the Orchestra del Teatro Comunale di Bologna to great acclaim, and to present his lectures in such repertoire as …